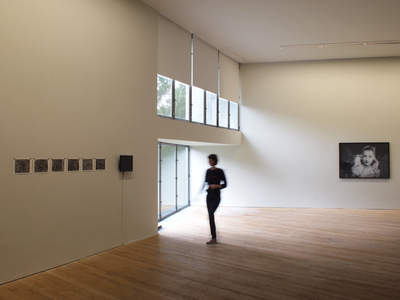 Motion Capture is an exhibition that explores the relationship of movement in two artistic media: drawing and the moving image. Featuring artworks from the mid-twentieth century through to the present day, the exhibition emphasises the way in which artists have employed the capacities of these mediums to communicate and embody movement. Drawing and moving image might not seem like obvious partners. First of all, there are clear technological differences between the two media: one tending to involve cameras, projectors, DVD players and editing equipment, the other seeming to require little more than a pencil. There are further differences if we consider their status as material objects. We might expect drawings to be static and singular objects, while moving images are implicitly ephemeral and capable of being transferred between formats. All of these apparent differences seem to set drawing and moving images apart, while also suggesting their different potentials of representing and capturing movement. On closer inspection, the distinctions between drawing and moving image aren’t so clearly cut. Like most drawings, moving images are composed of a sequence of discrete traces that work together to constitute the image. And while a drawing on paper might be a static object, our vision is durational and involves the action of our eyes and body; we do not see a drawn line all at once, but rather we look across it, up and down.

The question of how we understand drawing in our increasingly technological world is fundamental to Motion Capture. The traditional characteristics of drawing as a tactile and intimate medium might seem at odds with the digital networks and simulations of our age. Yet, Motion Capture emphasises the way that drawing re-emerges in new forms, and often in response to technologies that have altered our sense of movement, time and space. Such a technology is cinema, which is an important reference for many of the featured artists. The exhibition features drawings by Henri Matisse that he referred to as the ‘cinema of my sensibility’, through to contemporary works by Pierre Bismuth that use drawing to trace the hands of Greta Garbo and Sophia Lauren in famous cinematic episodes. The relationships with cinema as a technological form of moving image relate to drawing’s own abilities of recording movement, considered as a sequence of marks or an unfolding of lines. Cinema recurs again in works by Brian Fay, focusing on the dust and scratches that have accumulated in an old Buster Keaton film. As with video works by Ailbhe Ni Bhriain, movement in these works is understood in terms of material deterioration and the slow erasure of the image. Drawings can capture movement in ways that are both deliberate and involuntary. The psychoanalyst Jacques Lacan used the phrase 'the rain of the brush' to describe bodily gestures that escape our systems of conscious intention and linguistic structure. These ideas are developed in works by Susan Morris that use data from a motion capture studio, rendering her own body movements as a series of lines and traces that play between the registration of facts and their contingent, abstract effect. In Tom Hackney's work also, specific references to chess manoeuvres played by Marcel Duchamp give way to abstraction; real occurences becoming graphic and seeming to loose all 'trace' of reference. These works, like Henri Michaux's experimental illustrations that operate between writing and drawing, communication and symbolism, encourage different ways of understanding how artwork can operate between meaning and nonsense. There is no key that solves all the puzzles that works of art pose; part of art's significance is precisely not to be explained away in these terms.

The sense of the human body as emerging and unfixed is pronounced in works by William Kentridge and Alice Maher, whose animated film and video work introduces a fluid interaction of human form; Kentridge's film continuing his interests in the body politics of post-aparteid South Africa, while Maher's work creating a borderlessness between human and animal, the familiar and uncanny. The sense of connection between drawing and the human body is perhaps most demonstrably expressed in Dennis Oppenheim's Two Stage Transfer Drawing, which presents video documentation of the artist and his son copying drawings on each other's bodies. Movement in this work is not only in the tracing of the drawn line, but in the generational movement of father to son and vice versa. A different sense of proximity occurs in 16mm film work by Tacita Dean. In Still Life, Dean's camera focuses on the markings on working surfaces in Giorgio Morandi's studio. This work not only represent the work of a younger artiss that are approaching the legacy and working practice of an elder artist, but also refers to elements of hand drawing within their work as a counterpoint to the mechanical movement of the projected film. The relationships between drawing and moving images are multifold and complex. They criss-cross ideas of technology, legibility, and the human body, both in the act of drawing but also in the act of looking. In this way, Motion Capture seeks not only to re-think the relationships of artistic media, but also re-invigorate the relationships between artwork and viewer.